A classic Dreamland production that somehow had managed to pass me by, Multiple Maniacs may just be Waters’ true masterpiece. Unlike Pink Flamingos or Female Trouble, where Divine’s characters are driven by perhaps overly-cartoonish grandiose ambitions of infamy and depravity, Maniacs‘ incarnation of Lady Divine has her pettiness and hyperbole balance one another out to the point that her motivations seem typically, dare I say, reasonable?

Coming closest therefore to addressing the Dreamlanders’ actual desires, it is unsurprising that Maniacs effectively represents their actual principles, too, before they become refracted into different characters in later films. At the heart of Multiple Maniacs‘ philosophy is the celebration of family, however alternative it may be, and, accordingly, that the greatest sin of all is betrayal. Pink Flamingos addresses the same issues of protection of an alternative family structure, but the threatening forces are external tribalist animosity. Polyester recognises the internal threat of betrayal, but within a bourgeois heteronormative nuclear family. Multiple Maniacs‘ power stems in many ways from its reflection on the need for unity within queer social relations, to such an extent that its prolonged jump-cut sequence between Divine and Mink’s “rosary job” and Jesus, first feeding the “5000,” and then being given the kiss of death by Judas, and his inevitable crucifixion, cannot be interpreted purely as simple sacrilege. Instead, this is Waters himself engaging with the parabolic.

Considering the motley crew of reprobates involved in this and practically all productions of Waters’, Multiple Maniacs is the perfect love letter to what was to come. 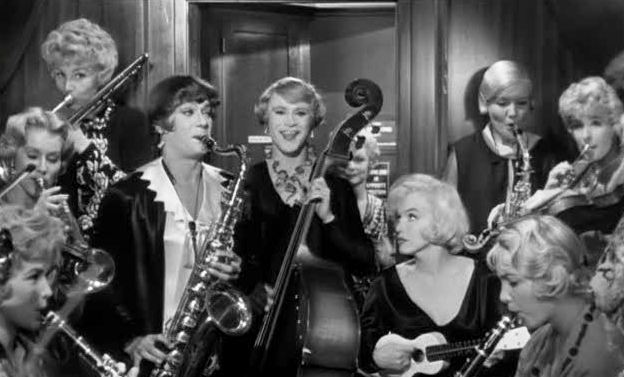 I don’t even know how many times I have seen this film, and it should come as absolutely no surprise to anyone who knows me, but this film never fails to enthral and delight me, every single time. I absolutely belong to the not-inconsiderable ranks of those who consider Some Like it Hot to be the greatest comedy of all time.

But what is it about Some Like it Hot that makes it stand out, 57 years after the fact? Leaving aside – at least for now – the universally impeccable performances (even though it is made quite clear in Marilyn Monroe’s eyes and occasional uncertainty in her voice that she was clearly struggling under the influence of pills at this stage – stories of 47 takes just to get her to say “It’s me, Sugar” in the right order attest to this – and yet, through direction and editing, not to mention her own perseverance, her most memorable performance still shines through), much of its greatness comes from its writing.

The narrative flow in this film is as smooth as running water and, as such, everything is exactly in its right place. Consider the opening: we begin with a hearse, driving through a city at night, all of a sudden pursued by a police car, all its inhabitants guns blazing, only for the passengers of the hearse to produce rifles of their own and return fire. As the hearse makes its escape, liquid leaks out of the bullet-holes left in the casket, whose lid is revealed to contain nothing but scotch whiskey. Finally, the words “Chicago, 1929” appear on the screen. In a way, this simple sequence articulates classical film-making at its very best: narrative created through conflict; not just the obvious conflict of cops vs robbers, but the more subtle examples of oxymoron and juxtaposition, allowing the humour and confusion of subverted expectations to carry the scene, with the conflict’s resolution also acting as its first explanation: this is Chicago, 1929: city of bootleggers, in a time of prohibition. Any other film might have had an establishing shot and/or those words, telling us the date/location before the fact, thereby making this some pseudo-documentarian “slice of life” point; instead, by reversing this trope, the setting justifies the action, allowing the action full comedic and dramatic potential, unencumbered by detail (I recently, appreciatively noticed the series Preacher doing just this, too).

We then follow an undercover detective, entering Spats Columbo (George Raft)’s riotously successful speakeasy, ingeniously hidden within a funeral home, sitting next to the dancing girls and the band, tenor sax and bass played respectively by Joe (Tony Curtis) and Jerry (Jack Lemmon) – we are led to our principle characters by following a secondary plot. After the club is raided, Joe and Jerry witness the gangland massacre by Spats of the rivals who ratted out his establishment, inspiring them to dress in drag and join up with Sweet Sue and Her Society Syncopators for a three-week gig in Miami, Florida.

It seems a small point, but it is in fact highly illustrative of the tightness of the narrative: we follow police, following mobsters into the mobster speakeasy, where we meet our protagonists, who are put out of a job by the police raiding the joint, inspiring a bloody reprisal by the mobsters, who chase the protagonists into Florida, where, eventually, the mob will end up, chase them again, before themselves being killed in a bloody reprisal against the first, whilst the events in Florida see the protagonists to safety. Complex, yet purely seamless, every single scene matters, and is beautifully interwoven not only with the ones immediately before and after it, but throughout the entire film. Thus, Some Like It Hot exists in a wide and believable universe, but also in an holistic one – by having each situation matter, each occurrence is justified. By each occurrence being justified, the audience will never feel cheated or insulted by a turn of events. Thus, the narrative thread of “destiny” upon which classical film structure is so dependent has rarely been so deftly executed: we, as an audience, are able to place our trust in Some Like it Hot, in a way unlike so many contemporary films.

It is without a doubt this harmonious interconnectvity that carries this film so well: it feels as though each and every line has its own comeback AND at least one call-back. There are at least three or four separate jokes in the film relating to Blood Type O alone, all of them different, all of them funny, all of them contextual. That’s pretty damn impressive, if you ask me. Joe at one point lists all the terrible things that could (and, of course, totally did) happen, early in the film: “suppose the stock market crashes, suppose Mary Pickford leaves Douglas Fairbanks, suppose the Dodgers leave Brooklyn, suppose Lake Michigan overflows…” (a line which, in any lesser comedy, would have the characters stopping for multiple tedious fourth-wall-breaking nod to the audience), to which Jerry replies (having seen the detective) “don’t look now, but the whole town is underwater.” Far, far later into the film, as Joe is schooling Jerry in the old adage that one can’t make an omelette without breaking an egg, Jerry sees Spats and his henchmen turn up in Florida and responds “don’t look now, but the omelette is about to hit the fan!” The skill of the writing allows call-backs to function in the most oblique and purely tonal sense, whilst still remaining completely successful in the process. It is this devotion to the god in the details that ensures Some Like it Hot will carry on gaining new fans in another 57 years and beyond, long after the cynical “<insert joke here>” format films of men like Seth MacFarlane and Todd Phillips are rightfully forgotten.

Of course, Some Like it Hot is also a vital film in its existence as one of the final nails in the coffin of the oppressive Film Production Code, in its glorious celebration of many facets of queerness, not only in having hired the brilliant drag queen and trapeze artist Barbette as an on-set consultant in the art of “gender illusion,” but in the wider context of its presentation of drag’s potentiality. Little if any time at all is spent remarking on preconceived notions of humiliation or emasculation as a necessary element of, or psychological response to, cross-dressing. Instead, both protagonists are liberated from what might otherwise have been an inescapably predictable tropey existence: Joe, who begins the story as a selfish, womanising manipulator, becomes in Josephine a respectable and more than a little prim confidante for Sugar Kane (Monroe), whilst Jerry – Joe’s hapless sidekick, dragged around, constantly pessimistic – becomes the gloriously loud, opinionated and popular Daphne. Of course, perhaps most interesting is Joe’s other other persona: his male drag-king act as Junior, the Cary Grant-caricature millionaire, in many ways the dialectical synthesis of Joe and Josephine, via whom he manipulates Sugar into falling in love with him (in a not un-Shakespearean fashion) through a parodic process of what one can only consider erotic conversion therapy for the type of man one would normally expect to say “when I’m with a girl, it just leaves me cold.” However, through the foundation of gentleness and sensitivity of their communion – a trait Sugar inexplicably believes all short-sighted men share – he finds enough of a conscience to spare himself from unsalvageablity. Jerry as Daphne’s relationship with the fantastically named lecherous “rich millionaire” party-boy Osgood Feelding III (Joe E. Brown) is consistently hilarious whilst also profoundly effecting for any queer audience member – no reading-into required, when that final line in the film comes, it’s a joyous celebration of “whatever”-ness in the face of social convention that will remain with me for all time.

The cinephilic ensemble of Some Like it Hot expands the concept of performativity to be relevant to all characters in the film. The gangster subplot is littered with as many recognisable faces – George Raft, Pat O’Brien, Edward G. Robinson Jr – as the comedic narrative is – Joe E. Brown, Dave Barry and others. The gangsters not only reflect real life (the opening credits may claim similar events are completely unintentional but the fictionalised St Valentine’s Day Massacre says otherwise), but also fictionalised ones. Spats is only just stopped at one point from smashing half a grapefruit into a henchman’s face, in a clear reference to the most infamous scene in gangster film classic, The Public Enemy. It seems reasonable to view Some Like it Hot performing Butler-esque commentary on the performativity of aspects of gender, race and class all round. Of course, the cineliterate nature of the film’s comedy has also paradoxically helped it escape dating: by being a film, made in the tail-end of the 1950s, set in the tail-end of the 1920s, opting to be one of the exceptionally few 1959 films shot in monochrome, Some Like it Hot convinces the audience it is an older film that it is, only amplifying its relevance in the resultant contrast. The fact it manages to do so by addressing themes progressive for the time it was made allows it to exist in a time all its own, as it shall continue to do for years to come.

Some Like it Hot is cinematic viewing at its most fundamentally essential. If you have not seen this film, you have not truly seen film at all.